A studio painting step by step

I've painted this scene several times before, all with slight variations on a theme. This one is a commission for a specific size so needed to be compressed into the shorter format. Each time I paint the same subject it gives me an opportunity to unleash my artistic licence and try out something a little different. Each new painting (hopefully) gets better and better as I gain a deeper understanding of the subject. In this version for instance I felt freer to invent the subtle shapes in the dunes grasses and also had fun playing with the impasto highlights. As in life, no path ever gives you the same journey. 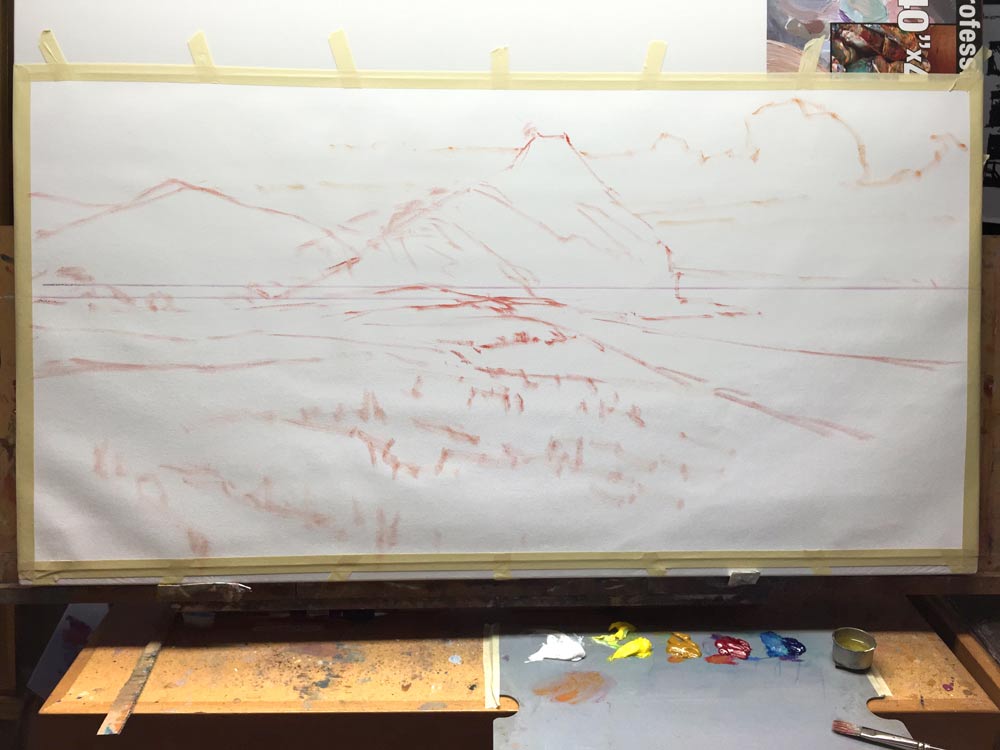 Canvas: Fredrix Ultrasmooth (purchased in a roll, cut to size and stretched on a board using 3M masking tape.) 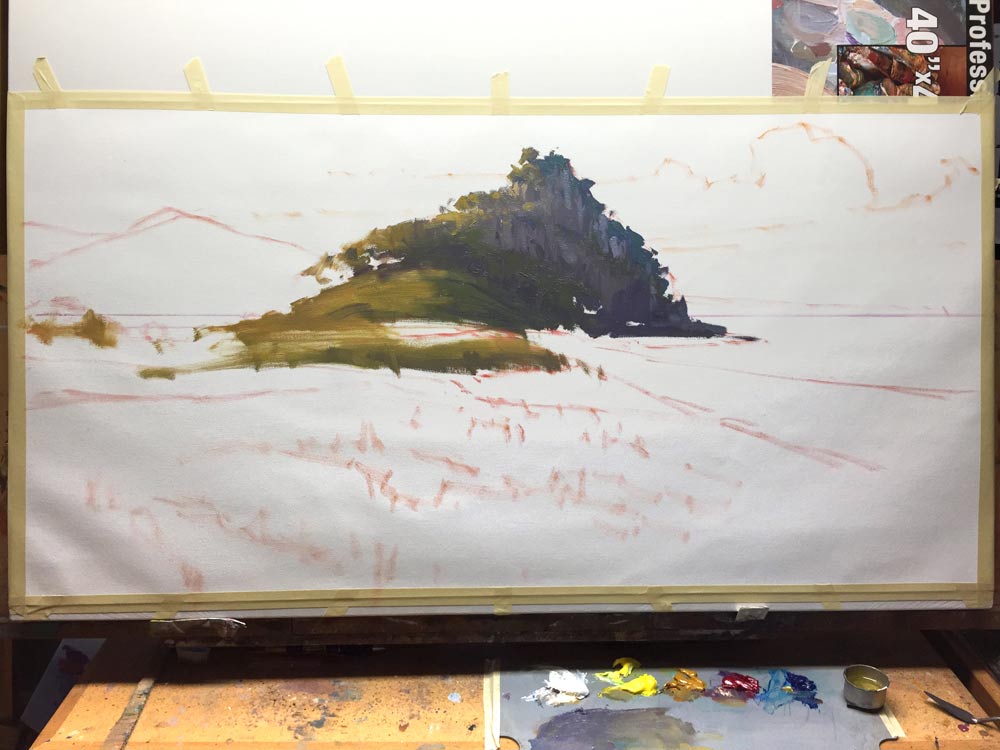 Normally I work from Darks to Light all over the canvas. In this case however I've started at the centre of interest and set the darkest dark in that area to be about a 7/10 value so that it leaves room for darker darks in the foreground, creating depth and  a sense of light through the air. I know I'm going to create a bright warm glowing area around the sun so I've made the area closest to the sun slightly lighter and warmer, and also added a touch more blue to the mountain on the right where it will take on some of the cooler sky colour there. No highlights have been painted at this early stage. 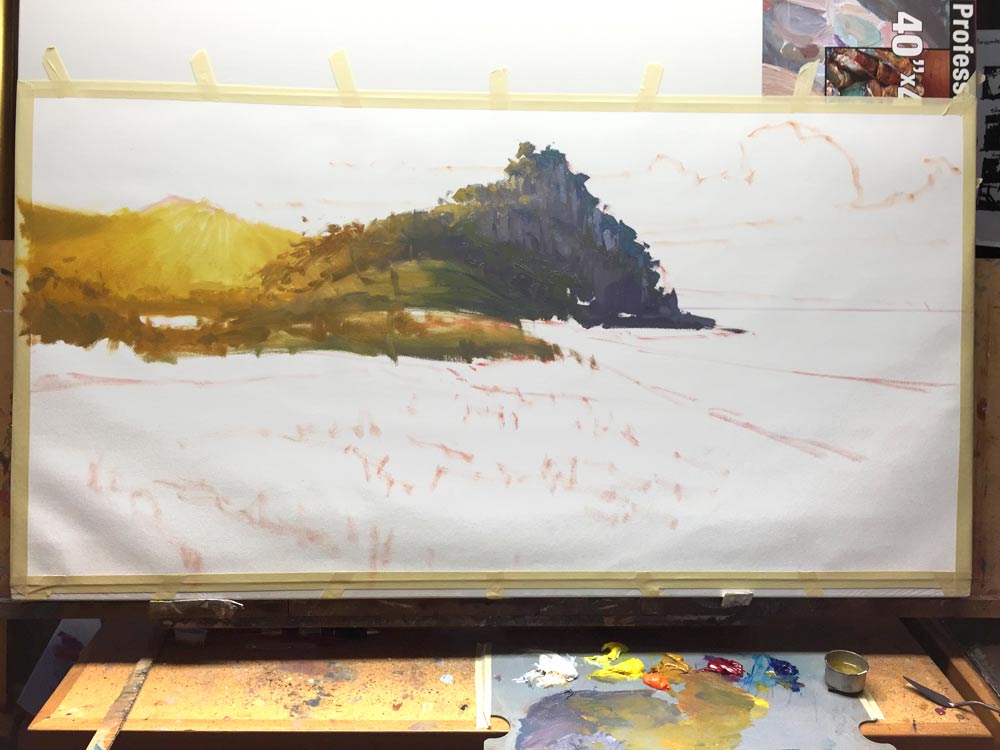 Closest to the sun I used just primary yellow and white. Moving out from there I added more and more yellow ochre and less white. All of the elements surrounding it must get gradually darker and cooler, but dark objects like trees might transition through oranges and reds to eventually become cooler darker green further from the sun. I work with larger brushes (#8 bristle flats) to begin with so I don't get carried away with the details. 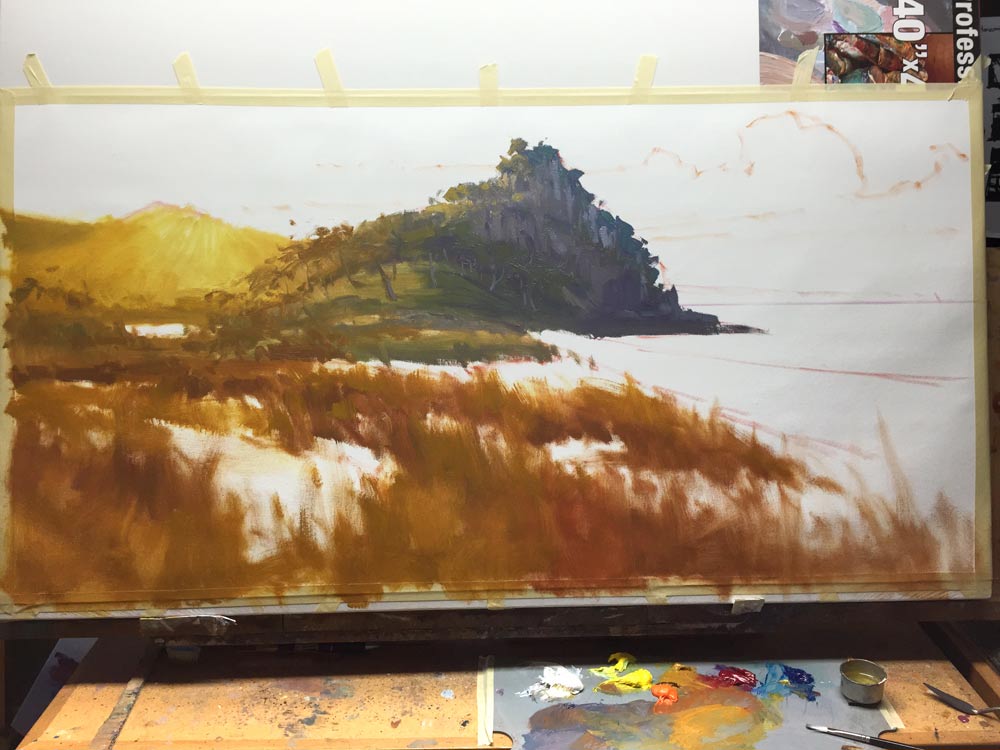 I've blocked in the darks in the foreground quite thinly using enough walnut oil to let the paint cover the canvas easily, leaving room for the light areas to work down into these. I'm inventing the shapes so I just keep in mind that they need to get thinner and flatter as they recede to give the illusion of depth. Note that the brushstrokes in the foreground are much larger too - it all helps to trick the eye into believing there is real depth there. 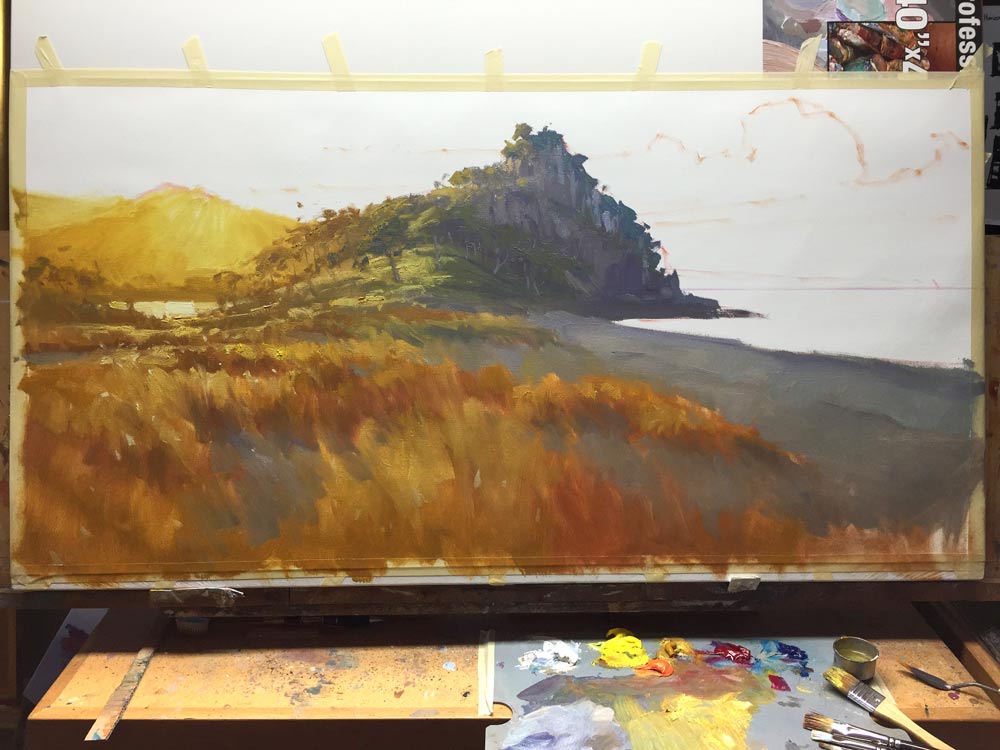 Now the lights have gone on top of the darks in the foreground and the are applied thicker, with no walnut oil and really much thicker, lighter and warmer closer to the sun. The sand has been blocked in with a slightly warm grey believe it or not, but it looks slightly cool because it's surrounded by all that warmth. A common mistake would be to paint it cooler than necessary, not allowing for this effect of 'simultaneous contrast'. 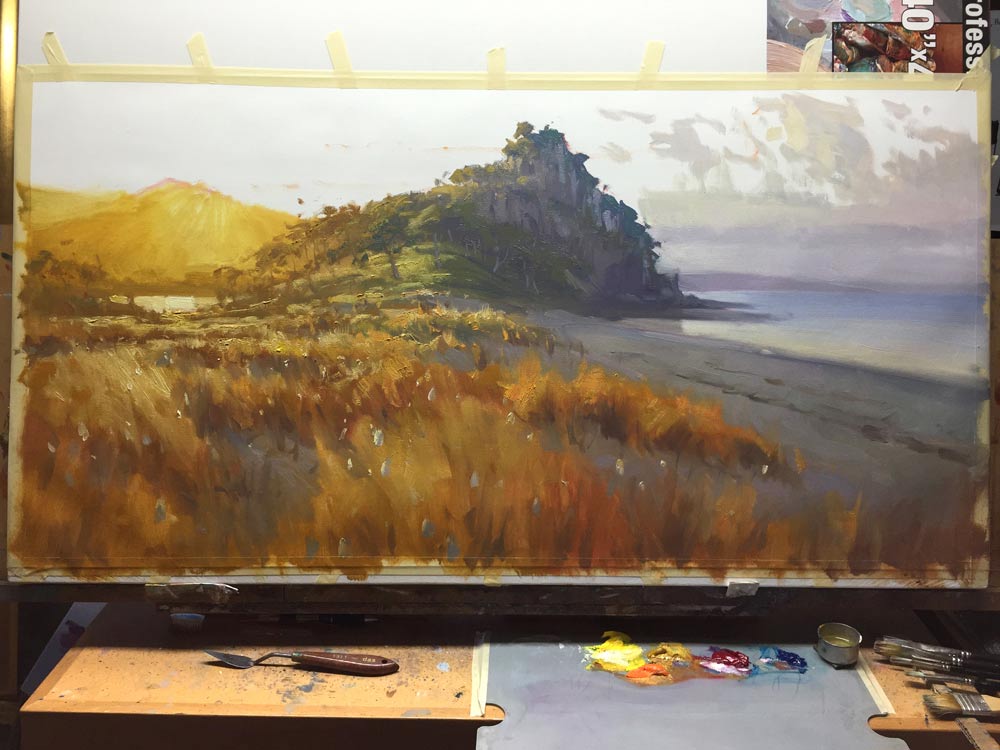 The ocean and shadow sides of the clouds are placed in, again not going too blue because I want an overall warm tonality in this painting. I've also added a variety of cooler and warmer greys into the sand - cooler where it might reflect the sky to the right and warmer on the beach where it might reflect some of the warm light from the sunlit clouds, as the shallow water is doing. 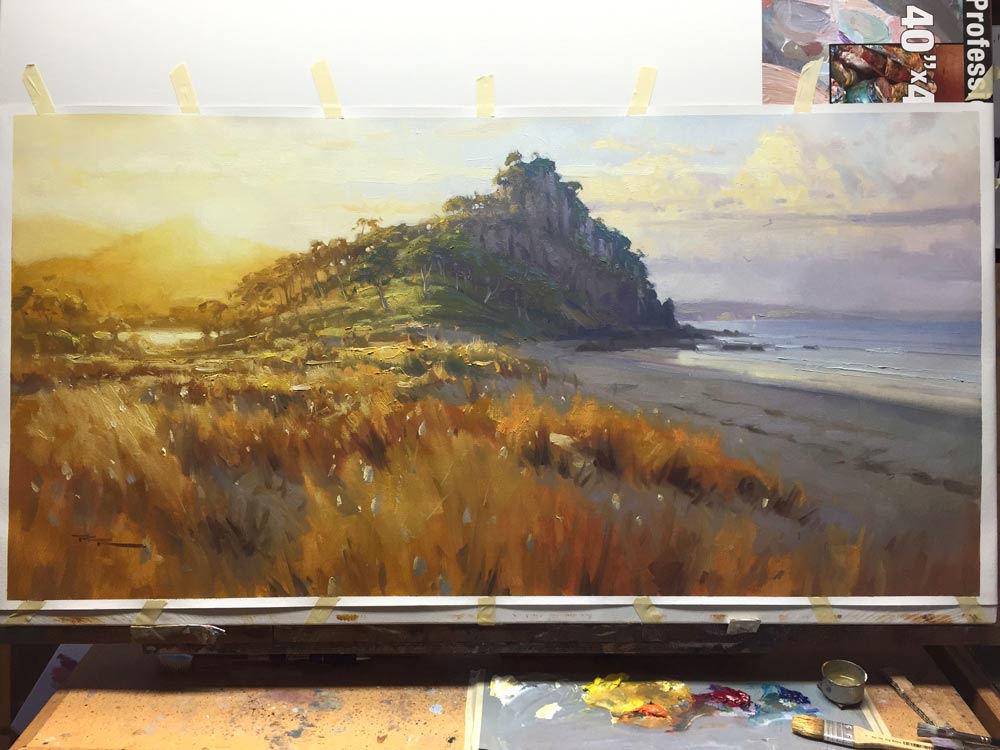 The finished painting. The sky and clouds got warmer and lighter as the approached the sun, a few small clouds lending scale to the big ones. The sun itself was painted in very smoothly with a palette knife in a circular fashion so no errant lumps of paint would cast tiny shadows there and spoil the illusion of intense light. The foam in the waves was painted in a light cool grey since all that area is cast in shadow. More thick impasto highlights were added to the landscape closer to the sun and a few darks strengthened in the foreground to again add more contrast between foreground and background.

As I have only recently joined this wonderful group, it is the first time I have seen this start to finish of Pataua on this site. I am thrilled to say I know where it hanging !My wife Tui and I grew up right there and her parents farmed there.....it is now a very long way from NZ.....but all ways reminds us of our past home.....thank you Richard.           Mark and Tui,   Fremantle WA. 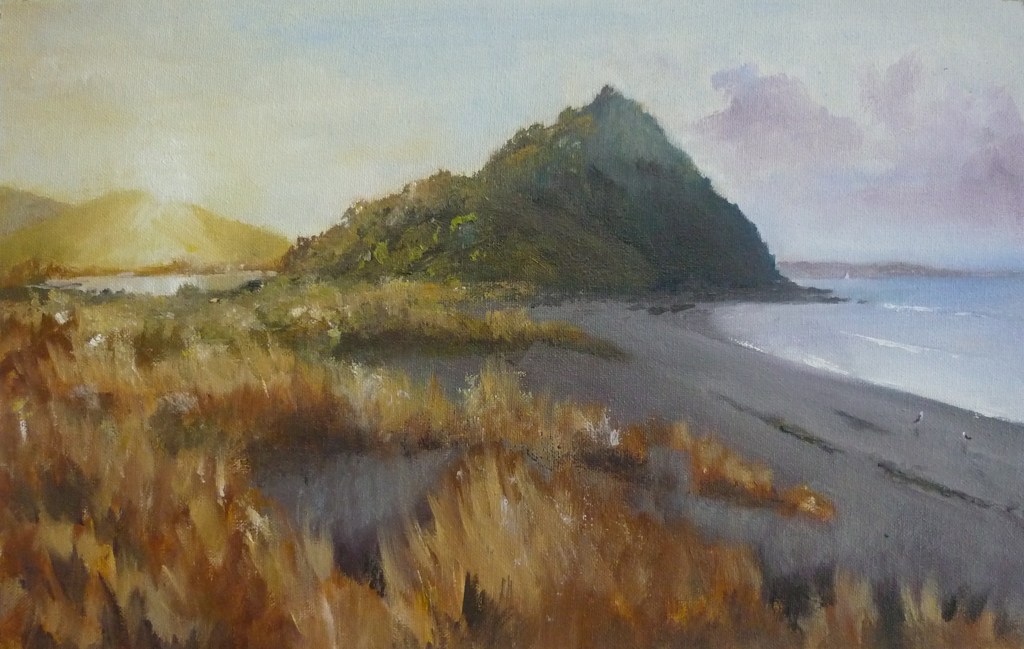 lmost gave up on this painting yesterday but decided to have another go at it today and feel quite pleased with the result. Richard I stretched Fredrix Ultrasmooth Canvas as per your blog for this painting which is 14" x 9".

Great to see it step by step Richard. Thank you for sharing. Its a beautiful painting, well done :)

Thanks Dori!  I am getting ready to place another order (but to Jerry's Artarama,,,I don't think Dick's carries the Cobra brand) so I will see if they carry the Walnut Oil.  Think I am going to paint this challenge smaller (12 x 12), as.I am not finding any 15 x 15 canvas.

I found a great site, "Paint My Photo", where very talented and generous photographers offer their work to be painted...so will have lots to try and improve my painting skills on!

Candi  I have used them like a watercolor wash like you can do with acrylics.  I have tried several brands of water solubles and they all handle differently. Winsor Newton Artisan  I can buy at a local store.  That is what I began with and really had no problems. I  was reading so many bad things about them that when Richard began using Cobra I switched just because he loved them.  Is there a difference yes, but it is not any more different than switching brands with regular art oil paint.  You just play  and get the hang of using them.  People complained about the WNArtisan saying they were too gummy or sticky.  They could have solved that by using more medium for example linseed oil. BTW walnut oil makes them very pleasant. Richard was thrilled with using plain walnut oil which I could not find so  I bought on line Roasted Walnut Oil.  Someone said it was the wrong thing. I loved it and had no problems and kept it in the refrigerator.  Now I have Artists' oil Medium Walnut Oil made by M.Graham & Co from Dick Blick. I see no difference! However I first purchased by mistake Walnut Alkyd Medium which I do not use.  I learn by trial and error.  Any questions just ask.  I must stop and put the groceries away...........Smiles ;-)

Oh, Dori...have you ever tried them with just water?  Just wondering, I haven't yet.

I think Richard  said because of environmental concerns and his allergies.

I use WMo  for easy clean up with soap and water.   Smiles for asking ;-)

I like the written instructions too Dorian and Richard, especially since I am just starting with the Water Soluble Oils!

I have been wondering if there is a reason Richard uses the walnut oil rather than the Cobra Painting Medium I got when I ordered my new set?  I'm also going to have to order more tubes of colors, ran out and bought some of Windsor Newton's brand for some of the colors Richard used for  Workshop 41.  Better sign up for 42 now, and check out the supply list!  Think I better order brushes too!