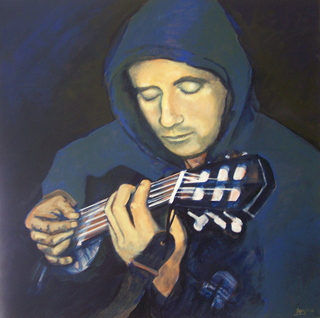 Marketing art in a changing world is a challenge.

Recently I’ve been listening to, ‘Flip’ , an audio book by Peter Sheahan, which deals with the rapid changes occurring in all industries, often propelled by new technology. He talks about the superstars of modern business having ‘ an ability to ‘flip’, to think counter intuitively and then act boldly, with little regard for business as usual conventions.

The music distribution industry is an example he cites where the landscape has been changed radically with the advent of the internet, the ipod and down loadable music files.

A case in point. I discovered one musician doing things differently as I looked for royalty free music to use with my art instruction DVDs.  Josh Woodward is a singer-songwriter based in Findlay, Ohio in the USA. Josh releases his music freely on the Internet and he allows you to decide how much you will pay for his music.  His last album, soon to be released, was funded using Kickstarter. Using this internet based funding platform for creative projects, he not only raised money to cover the cost of reproducing his CDs, he presold many of them before the albums release.

Josh is obviously talented. But talent alone doesn't guarantee an audience or success.  He is not waiting to be discovered. As well as  developing his considerable  skills as a musician and songwriter, he is taking full advantage of developing technologies to present his music to the world and is getting it into the market place in new and different ways.

His example of creativity and self reliance  is both encouraging and inspiring.

I'm keen to explore self reliance and innovation in marketing within the changing art industry. More about this in future blogs. Meanwhile I’d love to hear your ideas on different, new or innovative ways to market art, or promote yourself as an artist.

PS The painting above is a portrait of my son Caleb.

I liked your example of how freely Josh shares his music with the world.  It's a very freeing and trusting attitude to have.  It's also being in touch with your deeper self and knowing that everything will work out just fine.

I loved your own art story how you met an Aboriginal and started to see things differently.  I would love to hear more about that story if you would like to share please.

I love painting for painting sake and as yet not promoted my own art.  I guess in some ways I am like Josh who just goes with the flow and at the moment, I am happy just painting when I can paint everyday.

However, I am always scouting the internet for new ways to do things and I have come across several ways people promote their art.  I would like to share the work of 2 artists that in my opinion have caught the essence of what art is all about.

I came across this artist who painted the same scene over a period of 5 years until he had 365 paintings. The paintings are small but the collection as a whole is an extraordinary achievement.  Kevin Macpherson later published a book about these little paintings which he entitled "Reflections on a Pond".  So maybe it's the little things we do everyday that is the secret to success.

Here is the link to this amazing idea..

Another charming idea which is also based on little paintings also over several years is the work of an English painter, Julian Merrow-Smith, who moved to France and paints daily.  To date he has painted over 1,700 paintings and he had several press interviews as well.

Here is another link to someone who also thinks outside the box and also paints small.

I certainly hope that my two penny bits of information will help you to broaden your own horizons.