I'm on my way to Las Vegas to speak at the Plein Air Painting Convention... 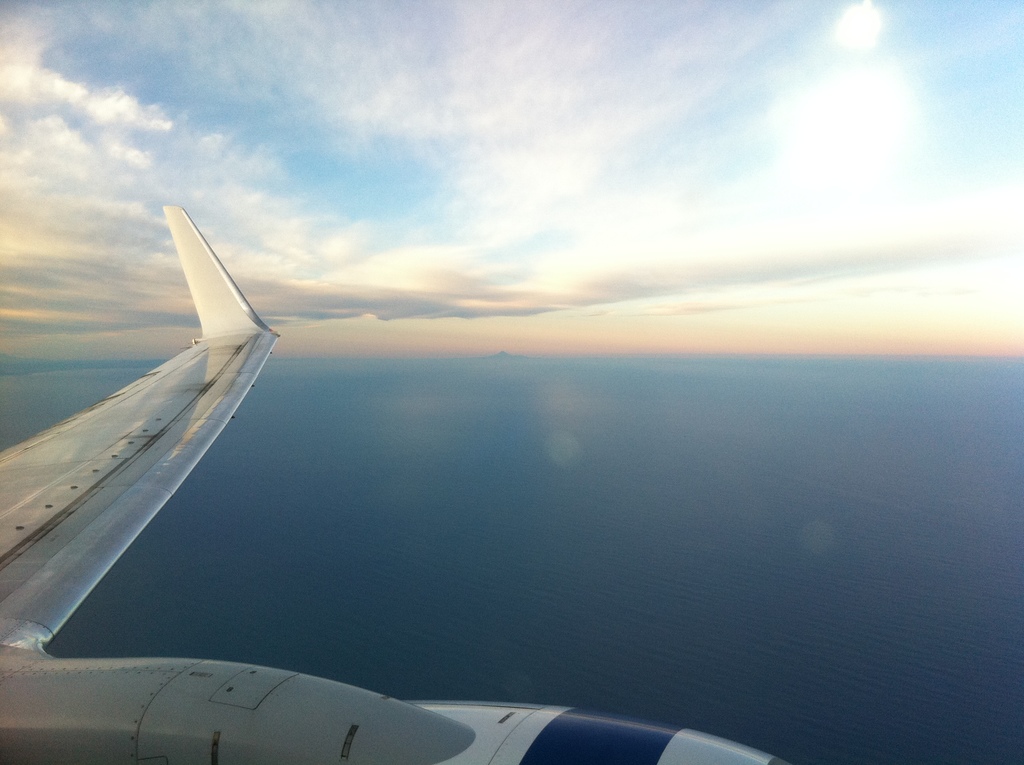 New Zealand slips back over the horizon on my way to Australia -> LA-> Las Vegas. 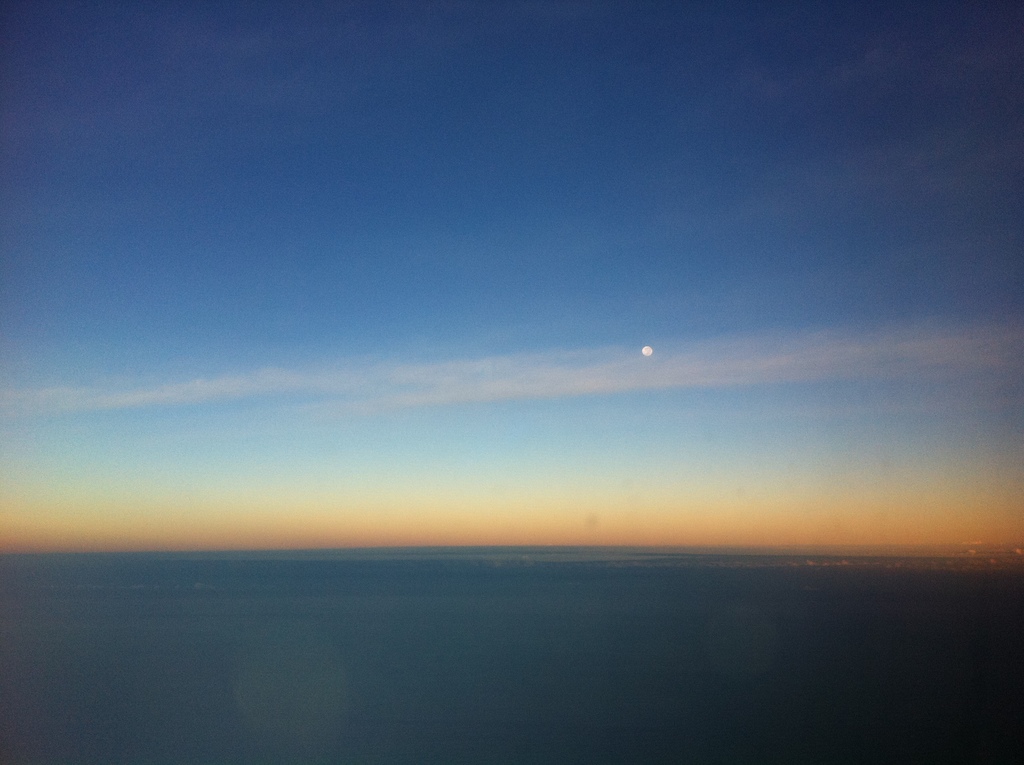 Moonrise over the Pacifc Ocean from 30 thousand feet.

Here's what I wrote to the family last night after I arrived in Vegas:

MADE it!!! What a mission that was! That 13 hours from Brisbane to LA was a killer and then I got misdirected by staff in LA, stood for an hour in the wrong #%**&^!!! queue in the wrong terminal just to find out I'd missed my plane to Vegas because of that, but luckily they have flights every hour to Vegas so it was no biggy, except that my baggage was not on the same plane as me, so more trouble there, and THEN oh my GOSH I found my way to the rental car place in Vegas and would you believe they all drive on the wrong side of the car AND the wrong side of the road here? Gave me the freakin hebeegeebies trying navigate around the city without a map, because yes I was very clever and printed out a googlemap route from the airport to my hotel, but I wasn't IN the airport when I started driving - I was about 5km away, so that and the left hand drive threw me right off and I decided to just follow my nose which actually sent me south east when I wanted to be going north west. Found a friendly guy raking his lawn in the distant suburbs though and he put me on track so then I had to navigate the freeway system which was a whole nutha physical challenge all it's own. I should have listened to Morpheus. Made it to the hotel about 1 hour ago anyway, found out how to use valet parking and forced myself to go have a corona and spaghetti & meatballs in the restaurant on the edge of the casino and back to my room for a shower (really nice room) and am just about to go into a coma but thought I should wring out my last few drops of consciousness before I sleep so as to try and reset my clock.
Met lots of friendly people on the way which was nice, but most of the trip I've just been trying to sleep sitting up in chairs designed for hobbits. It really makes me wonder if the extra 100 grand you have to pay for business class isn't worth it after all. Vegas really is crazy - miles and miles of nothing and then skidoosh! Vegas. Crazy. Nearly as insane as all the zombies downstairs pouring their grandkids christmas present savings into the millions of pokey machines there, and everywhere. They have them as soon as you get off the plane at the airport! I'm surprised there's not one at the foot of the bed which makes coffee too. I'm in bed now, very soon to be part of the bed.
So dont worry about me goodly family, I'm safe and sound in the centre of sin city. Might go and catch a Celine Dion concert or go and see the Monet exhibition when I regain consciousness, but I could just settle for an old school mugging - not sure yet. The idea of driving anywhere is a bit hairy and I'm sort of regretting spending the 5 g's on renting the F1 McClaren now, but there's only one way to get better I suppose and that is to start using third gear.
Onward and upward! zzzzzzzzzzzzzzzzzzzzzzzzzzzzzzzzzzzzzzzzzzzzzzzzzzzzzzz.... etc.
Love to ya'll from me and Elvis.
xo. 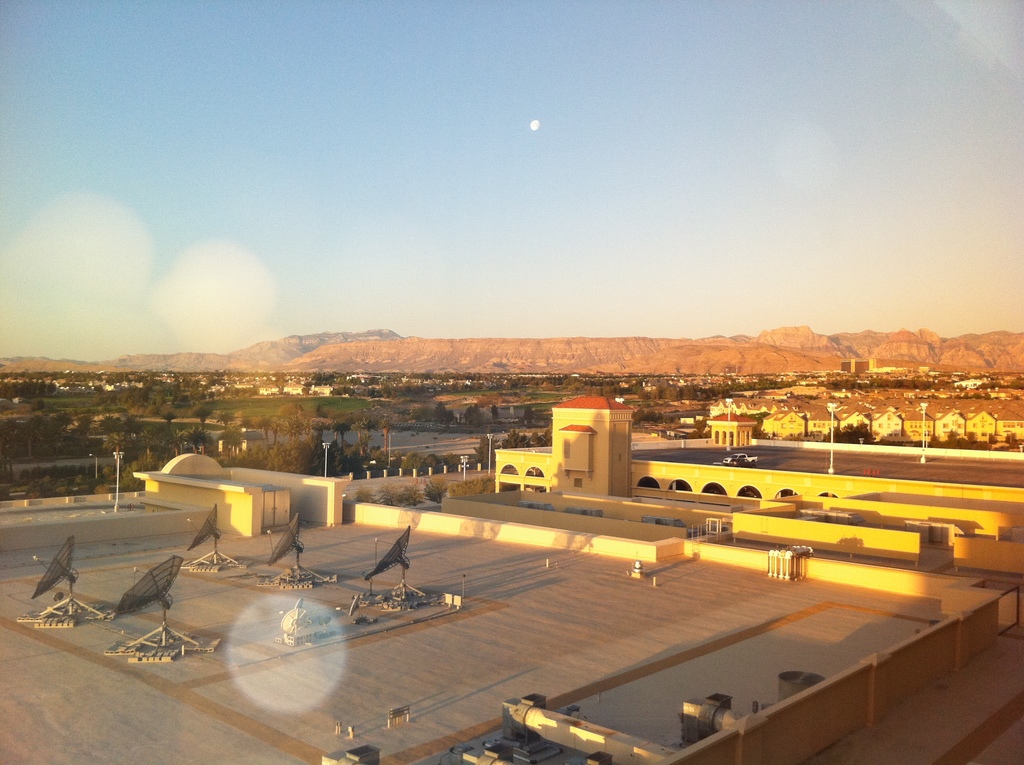 The view from my room this morning at 6:30am. 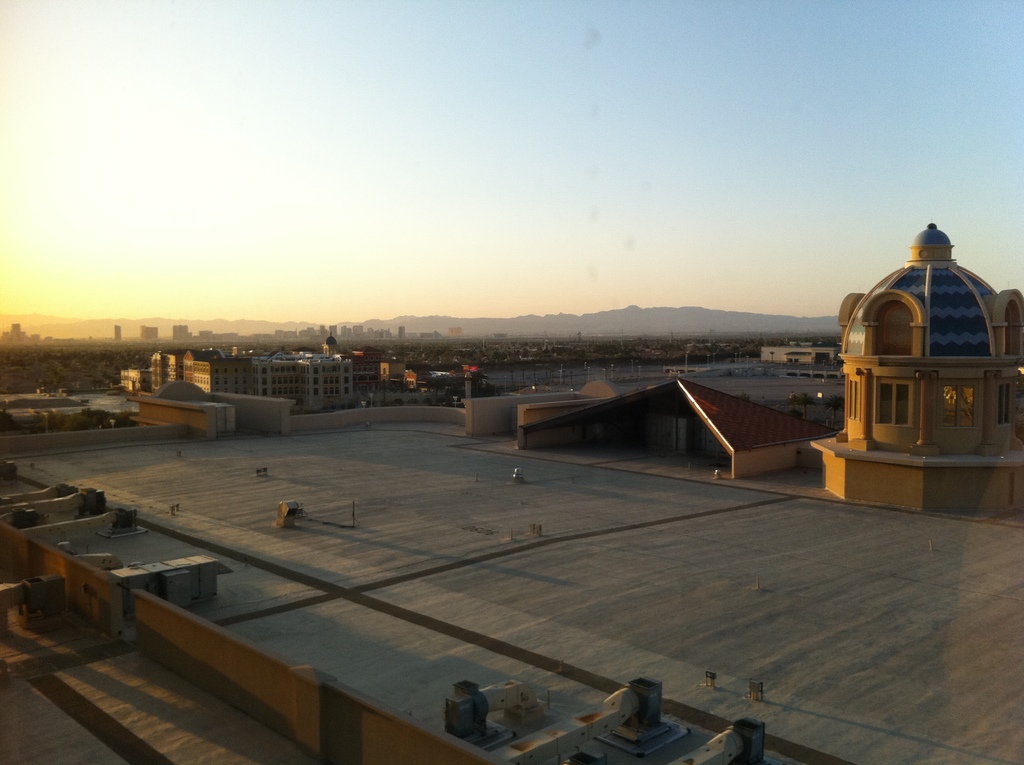 Looking um, south east I think, from my room.

So, it's the morning now and I will, very soon, get out of this bed and brave the freeways again to find a painting location in them thar hills so's I can remember how to paint before I have to demonstrate it in a few days when the convention starts. Wish me luck.

Hey there Richard; We had the same problems in Vegas when we were there in February; however we had a gps in the car, and they are a godsend. We weren't too thrilled with Vegas but loved the Red Rock country. Took lots of pictures. Have a wonderful time, and happy painting. Wish I could be there too painting with you too!

hope that your paints and baggage turned up in time.

Richard, you are really having an excited trip in a foregin country. So much fun and it make me laughing. I like your painting of Vegas. By the way, years ago, My husband and I stayed in Luxor hotel for 3nights. A lot of fun.  You must have told your family what your experienced and sensed. Hope the rest trip of your will be  fruitful and safe.

Hey Dorian, have a great time.....if you can laugh in life even at the hardest of times, you will get through it all....I'll laugh with you & Richard..enjoy. :)

Have been following Richard and laughing like crazy.  Yes Debbie I finally got that easel put together, taken apart and put together  again and in it's canvas bag and into the big suitcase with enough supply's for Richard!. My  clothes go in my carry on bag.  I fly out at noon and arrive in Vegas at 6 PM.  Smiles to all of you.......dor:))

Richard you sound like a little country boy in the big smoke...takes me back to when i first came to the city from the bush....life's very different. Have fun and enjoy it all, learn all you can but please keep your eye on the road. :)

Good on you Richard!  You sound so much like our typical "Kiwi" Best of luck for the rest of your journey.

Thanks guys for all your thoughts.

I braved the strip last night on my way to see Pen & Teller and get a gps from the car rental place. Actually I was just trying to get to the rental car place so I could find my way to the Rio Casino just off the strip where Pen & Teller were playing at 9pm. Ended up lost and going crazy headed for Lake Taho wherever that is but managed to luck my way onto the strip which eventually got me headed to the airport and some blessed angel genius put heavenly signs to the rental car return along that route so I managed to find my way there, GOT the gps, breathed a huge sigh of relief, programmed it to take me back to my casino (because it was 10pm by then) and the very first thing I did was pull out into 3 lanes of oncoming traffic which was not good for my Quan (or theirs I guess). It was just one car about 80m away, but enough to give me the solid heebeegeebies for a minute until I started laughing. After that it was SOOOOO SWEET following the gps I can't believe I actually made it across Vegas alive (twice!) without it. Had a nice dinner, learned some more about tipping, bought a little bottle of whiskey for my nerves and watched a good sci fi ("Chronicles") till 12:30. My baggage with my painting gear is still not here and the company says they'll reimburse me for anything I have to replace so I might take a trip to a big art supply store this morning and have some fun.
Too bad I didn't get to see Pen & Teller last night or walk down the strip, but it was pretty cool what I did see and Vegas hasn't killed me yet so I figure that's 2 for 0 to me. The two coolest things I saw on the strip were the Luxor and the pirate ships. The Luxor is a gargantuan hotel the size and shape of a pyramid, but made from black glass, and at night they shine a light beam straight up out of the top of it (think Batman Gotham City needs you, or The Last Element final scene, or Stargate) - very cool. The architect must have been a scifi fan. The pirate ships (full sized wooden galleons) were right there just off the sidewalk in front of a casino having a full on battle with canons and swords and gold teeth etc. Would have liked to have hopped out of the car to see that better but I was on a mission and so were the other three lanes of traffic around me. Spent a few seconds trying to get the iphone out of my jeans to take a photo, but figured it wasn't worth scratching someone's bumper and getting sued for a million dollars. Bit of a worry that, but now I've got GPS!!! and all is right with the world.

Dor's you got it worked out ok. enjoy

well Richard, me thinks it a bit different to NZ eh. stay safe and enjoy, learn then come home and teach us...lucky bugger.