Gotta love those happy accidents. I was out tutoring a lovely lady today (Hi Jennie), and was about 3 quarters finished my own painting when we both stepped back to take stock of our work. Suddenly a whirling sand dervish appeared and slammed my easel face down in the sand, not even budging Jennie's easel only feet away from mine. I wasn't over the moon with the work anyway so I wasn't too perturbed and after returning from washing my brushes off with water (water mixable oils) I decided to empty my water bottle over my painting to see if I could wash the sand off.

Next minute, the painting looks better than ever, and I was so much less precious about it that I attacked it without reservation and soon had this great expressionist painting sitting on my somewhat sandy easel. Thank God for happy accidents!

The next painting up the hill was somewhat more restrained, but halfway through I did take it off the easel, throw it in the grass (3 times), stamp on it a few times and drain my water bottle on it. That'll teach it!

So what's it all about? I'm simply trying to suggest objects rather than describing them, writing a poem rather than an essay, making music rather than practicing scales, letting the scene makes suggestions towards my artwork rather than dictating its terms. Above all, loving what I'm doing.

Next time you're not happy with a painting try beating it up, a bit. (Don't try this with other people's paintings). 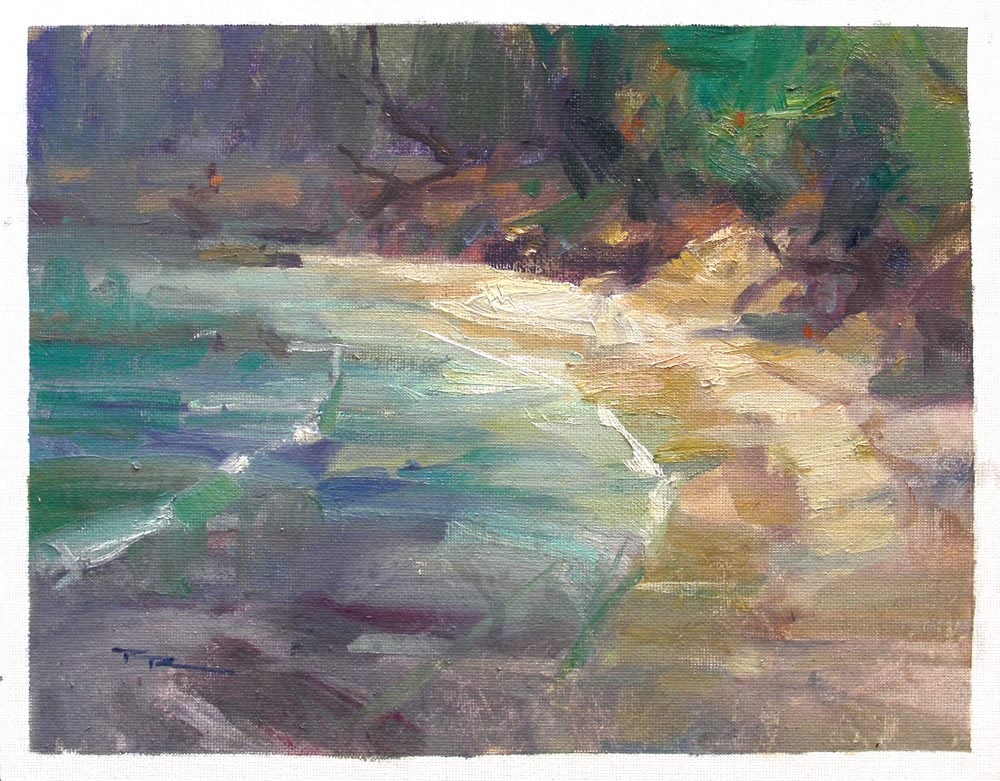 TOO FUNNY and fantastic results!

Loved the Happy Accident!  Sometimes we are too stressed about our work instead of relaxing and letting it flow.   As Margaret Olley said:  Some paintings have an easier birth than others.  Amen Margy!  One of my artist friends calls many of my paintings "happy accidents".  He's a perfectionist realist painter and drives himself crazy with detail.  Each to their own.  He does some wonderful paintings.

Thanks Richard for this  nifty  interactive web site and for the great information..........smiles and LOL : ))

Thanks guys. Someone emailed me this comment about fixing faceplant paintings done with regular oil paints:

"I know you use water soluable oils but if anyone is into regular oils. I have a hint to salvage the painting. I learned it at a workshop and it WORKS.

The facedown incident happened to an artist in a workshop group and he was about to scrape off the painting and start again when the teacher, Sammy Britt, stopped him. Took him over to the water hose and HOSED THE PAINTING DOWN WITH FAIRLY HIGH PRESSURE!!!  Everyone was aghast until afterwards and he turned the panel back over and told the art professor whose painting it was to lay it in the sun till dry. SURE enough, after spraying, the painting was a good as new. Wet but fine!. All the dry grass, sand and crude had been washed away. Hardly a brushmark disturbed.
I used the technique myself when my own stupidity almost cost me the painting. I was shimmying under a fence and dropped the painting beside me. Worked! Saved the days work."

Nice to learn about new tecniks