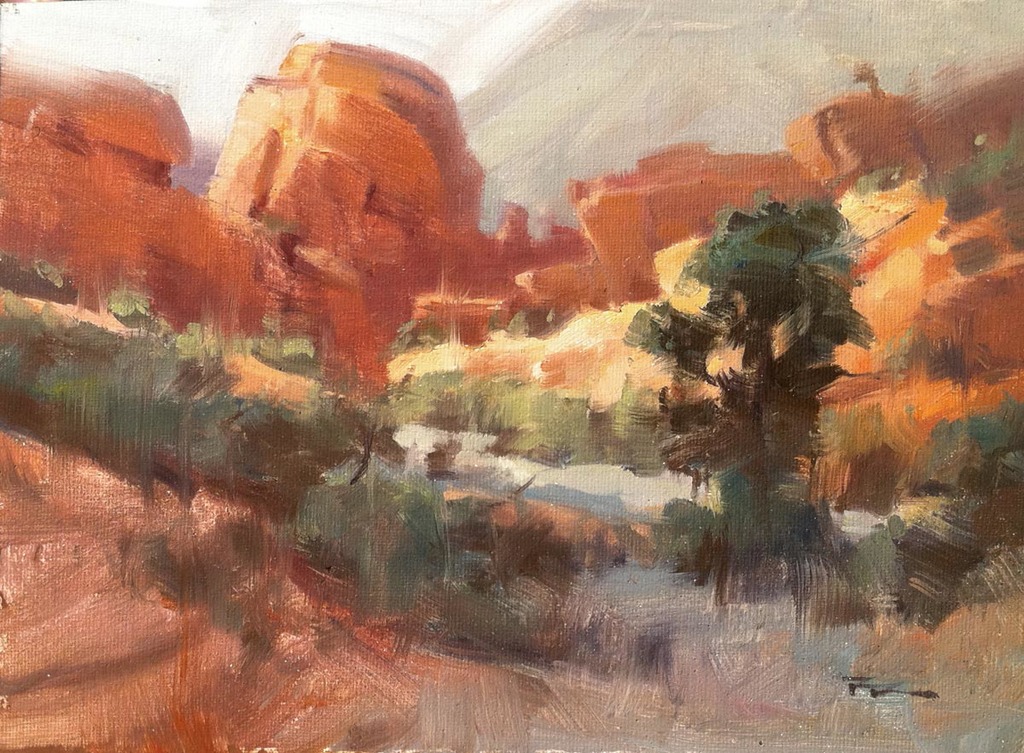 The scene. Again, being close to tall mountains their shadows move very quickly so it was important to get the blockin done as quickly as possible... 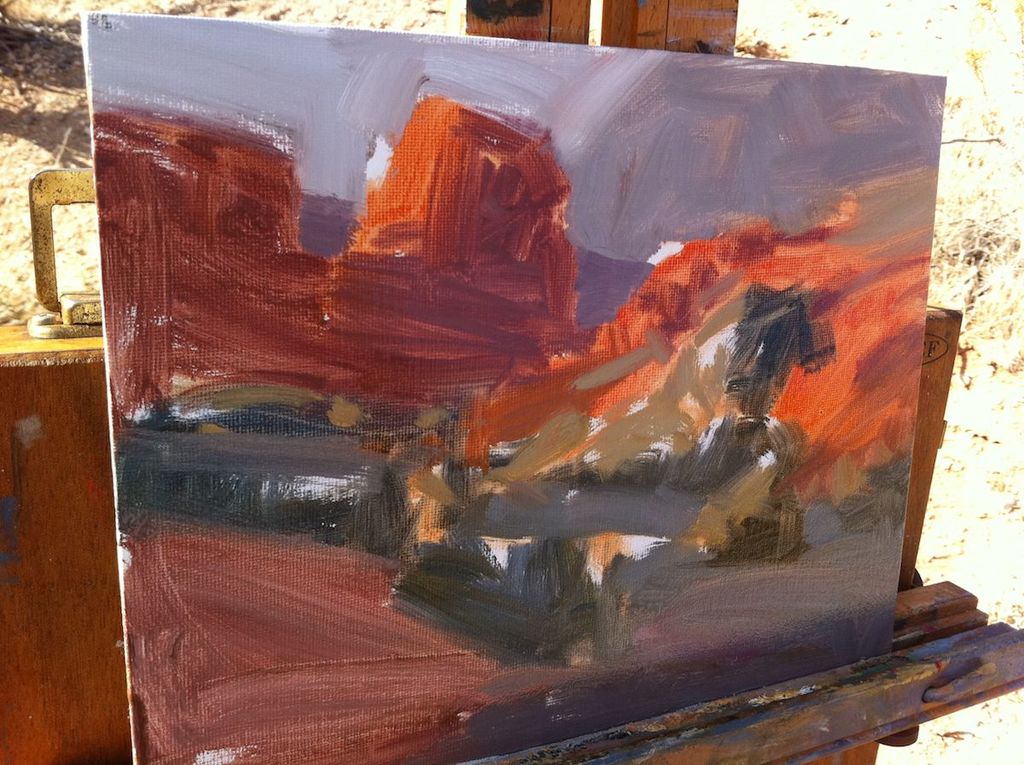 The block in - dark and light families. Happy to be painting again. An amazing place on a giant scale.

I finally met up with some other painters today. Got up at 6 (which is pretty good for me) and paid a visit to starbucks on my way to the Canyons. Apparently they don't do a flat white coffee. It's called a wisto or a misto or something like that. Tasted like a flat white to me. So I was painting down in this canyon by 7:30am and a couple hours later Ned Mueller turned up which was fantastic (I think I talked his ear off) and then Richard Smith about an hour later. By then a freezing cold wind was blowing through the canyon which sandblasted us and our work leaving lots of tiny white flecks of bare canvas showing on mine which was weird, so we packed up and I visited Red Rocks convention centre to see if I could practice my speech there but they weren't ready yet so I'm back in the hotel room patching up my painting and, well, blogging. The conference starts tomorrow so I'll be trying to get an early night for the 6:30 start.

Here are some short videos I took of the area:

(All very shaky because they're taken on the iphone.)

Hi Richard, Thanks for the blogging and pics. I enjoyed the paintings. Liked the one with the fence the best. Were you able to meet some of the people from this site ? I would love to  see some of the paintings done by them and to hear some of their experiences. Your orangie rocks with purple shadows are wonderful.

you'll do a great job Richard,,so don't stress..keep us up to date tho.

Hi there Richard; great pics; great blog, very funny! You look pretty comfortable standing there with your easel set up. Did you have to buy new painting gear, or did they turn up?? It can get pretty cold in the desert, even on a summer evening when the sun goes down, & the winds blow off the snow covered mountains. I am sure that you will have a wonderful time & meet some interesting people.  Good luck with your speech.

Comment by Tui Ellison on April 14, 2012 at 16:18
Thank you Richard for sharing your experiences with us. Like everyone here I wish I was there. Your descriptions of driving etc are very funny and I love the photos. I know you will be excellent when you talk, don't worry you've got it.
Looking forward to the next installment.
Tui

Thank you Richard ! I couldn't go this year, but would go next if you have another one in LV. You mentioned that you were on your way to Lake Tahoe, that is another beautiful site for painting. Maybe next year !

I have a lot of friends there. Wish I could have made it.

Looks like a wonderful place and I'm sure you are having a great time.  Lots of us wish we were there- we'll be waiting to hear more about it !  Good Luck with everything !

Looking great Richard! So glad you have time to venture around and capture the sights in paint. Wish I could be there for the lecture as I bet many do. Any chances you'll do this one again next year? Until then, I'm certainly enjoying living vicariously through your stories. Thank you for the share!