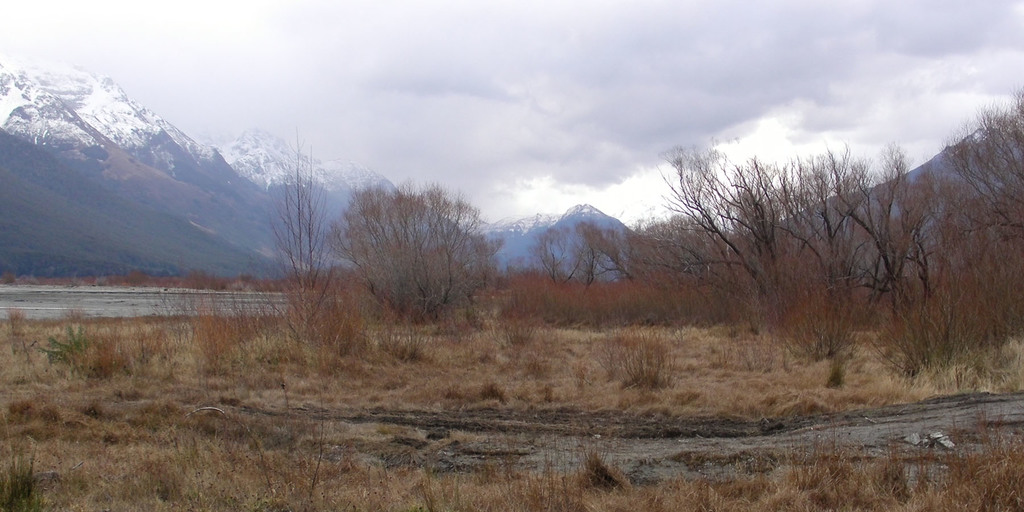 The weather here has decided it's not going to play nice anymore. We got rugged up anyway and drove down the road with little hope, expecting to be retreating home in short order to the warm fire. We spent a full hour idling from spot to spot along the shore waiting for one of us to glimpse inspiration and spark into action. A dozen times we decided to give up and a dozen times we decided to stay on, the weather getting worse by the minute. A blustery norwester peppered the truck with frigid rain, dropping the temperature to 3 degrees celcius. It was not looking good. However, at some point we began to resent our own apathy until finally we reached a turning point in the comforting airconditioning and stepped outside into the inclement weather, hauled our easels out and setup against all the odds to mine some gold from the hard gray scene.

It wasn't long before we were painting away happily and enjoying the challenge we'd set ourselves. Three hours later the weather could obviously sense it's impending defeat because it rallied itself and sent forth some really serious rain which pooled on our palettes and dripped off our canvases. At that point the smell of coffee wafting from the nearby cafe seemed to smell especially good and seeing as the paint was no longer wanting to stick to the canvas we packed up and got while the getting was good.

I spent another good 3 hours on mine at home moving things around and trying out different ideas, until I finally put the brushes down at 11pm. I learned such a lot from painting beside John and we both learned again that when you push through adversity and force yourself to action some of the best things can happen.

You are very brave souls ... i don't know if i would have been so determined.  How does that saying go? "out of adversity comes greatness?"   Your final painting was great!  But, glad im on this side of the pond (35degrees and sunny in Kamloops BC).  Maybe you should come and paint in BC during your winter months, Richard ... we have some inspiring scenery here.

I have to agree with you about the spray bottle. It can really mess things up.  I prefer to dampen the area I'm working with a soft brush using a medium and water mix. I've yet to try Golden Open acrylics.  I'm well stocked up with Chroma's Atelier Interactive so will stick with that for the present.

Anne, the way I use water when softening or loosing edges is to take a damp brush and gently rub it over the area I want to manipulate. Kind of like a dry brush motion. This will add enough moisture that you can blend with your finger. I tried the spray bottle and it generally gets things too wet and either it runs or I overdue blending an area. When this happens, as I am not a patient man, I generally mess up and find it hard to correct. I have only been using these for about a year now an am doing most of my plein air with these. Here is a supplier I just found with great prices  http://www.merriartist.com/

Thank you Jim.  I am getting the hang of using the mediums you mentioned, mostly using Clear Painting Medium and sometimes Slow Medium...no water.  Mixing more paint and loading the brush is something I need to practice.  Hopefully this next workshop will give me a chance to learn to paint in that deliciously loose style.

Anne, the interactive works great for loosening and manipulating edges if you use the unlocking formula or the slow mediums. Just use a little more load on the brush in these areas. I have always used fingers to smear, never tried using a brush with soft motion which I think you will need for what Richard is yakking about. We will have too wait and see. The plot thickens.

I love this soft brushwork.  I vote for a workshop using these techniques.  I don't think my Interactive Acrylics would be appropriate for the wet weather artist though.  May have to try oils soon.

I should of said with one of your learning videos for the brush stroke.

Richard, when you going to share the brush stroke you mentioned. Beautiful work by the both of you.