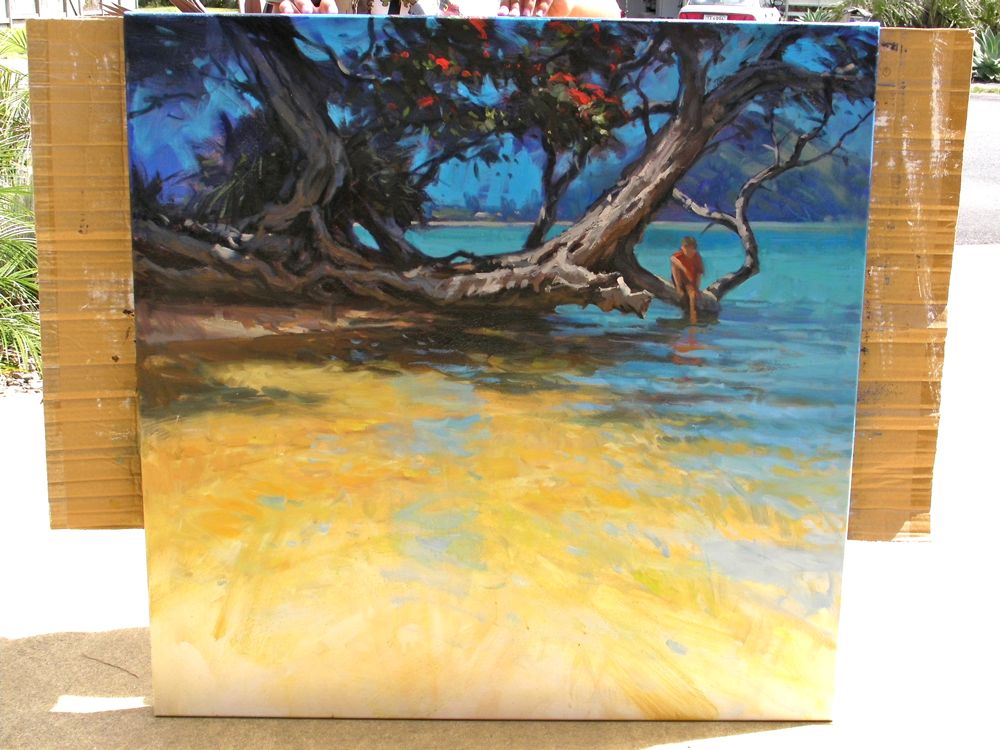 Here's where I'm at so far. Took a few days break to do some other stuff and let this one stew for a bit. The colour is a bit punchier here in the photo that it actually is in the painting, but it'll look different on your screen to mine anyway. I have increased the saturation of the yellows in the foreground though, which is perhaps the major difference since my last post. I felt that all the intense blue in the top of the painting needed some balancing power in the foreground. Now that I've gone and done it and can look back at the previous stages I'm not quite so sure it's good - might be a bit over the top. I mean it's nice and vibrant, but I'm not sure I'd personally like that splash of yellow on my wall. I do like powerful colour but I'm often facing this battle of 'how much is too much?' It's all subjective though I suppose.

I'm also not sure I'm happy with the water on the right now - sort of looks like blue paint rather than a true sky reflection. That seems to me to be the trickiest part of the painting - such a complex pattern of light/dark and cool/warm. Battling over the decision to risk what I've got to repaint it or to just leave it be.

Pretty happy with Luke's position on the tree. After 3 painting attempts and several sketches I decided to get Luke to pose for the shot and then photoshopped him onto the branch to get the drawing better. Might just sharpen some edges there a bit and put a little more light on him or conversely, darken the darks to make the lights appear brighter.

So you can see there's quite a bit of good old fashioned artist's angst going into this one, but there's also a lot of just joyful splashing around of paint. Really enjoying it. Thanks guys for all your comments. 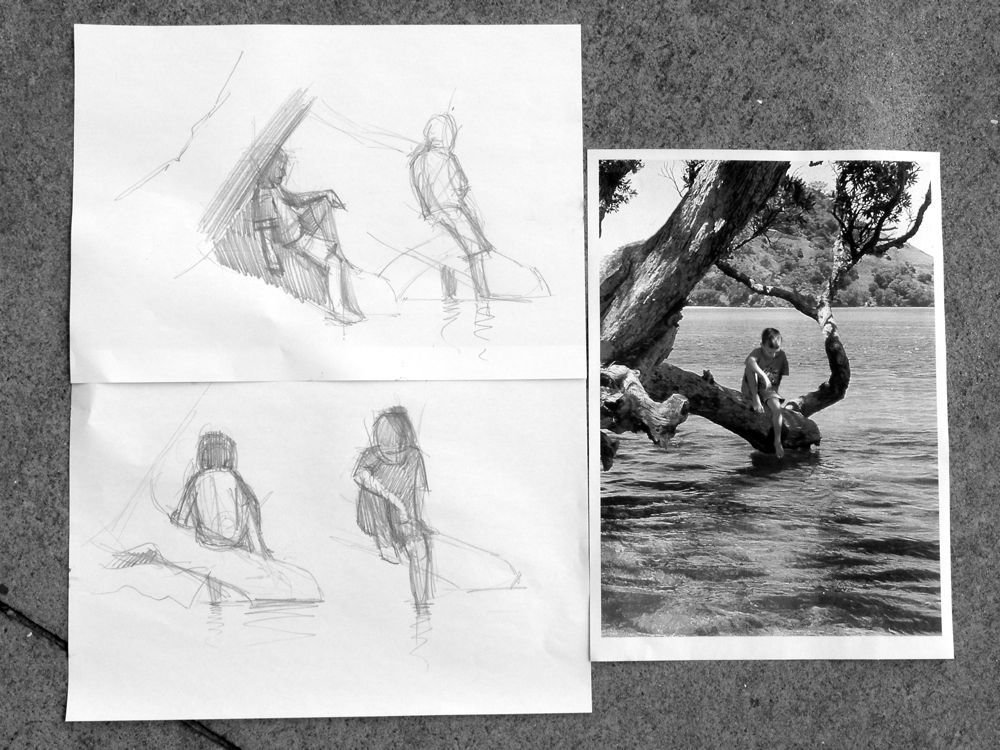 Below is the progress from whoa to go: 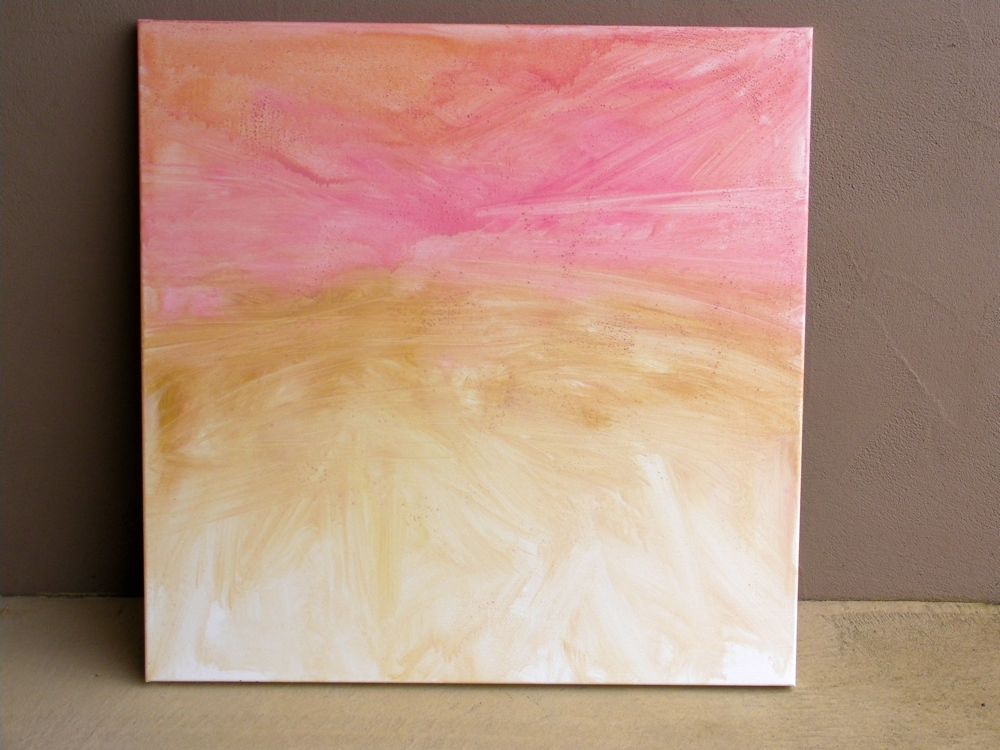 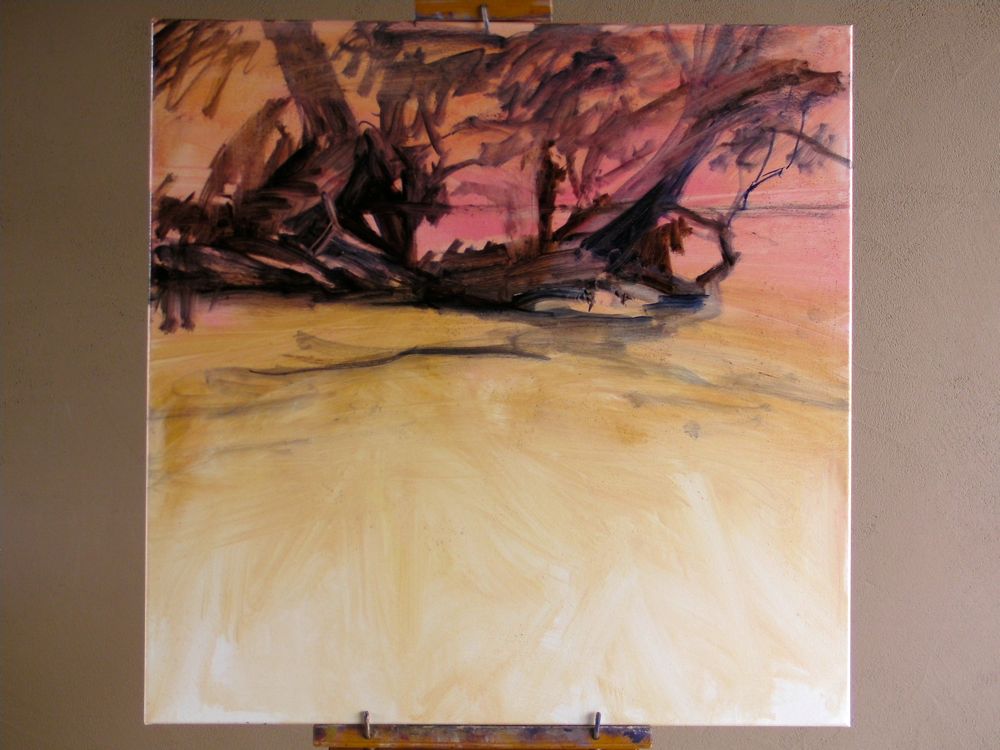 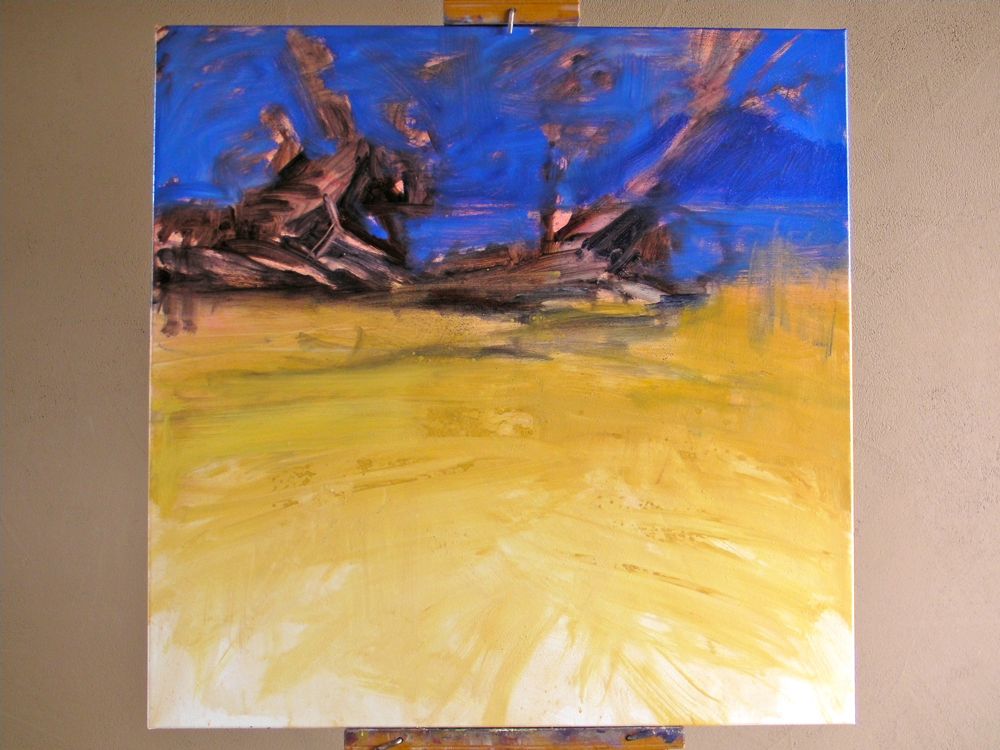 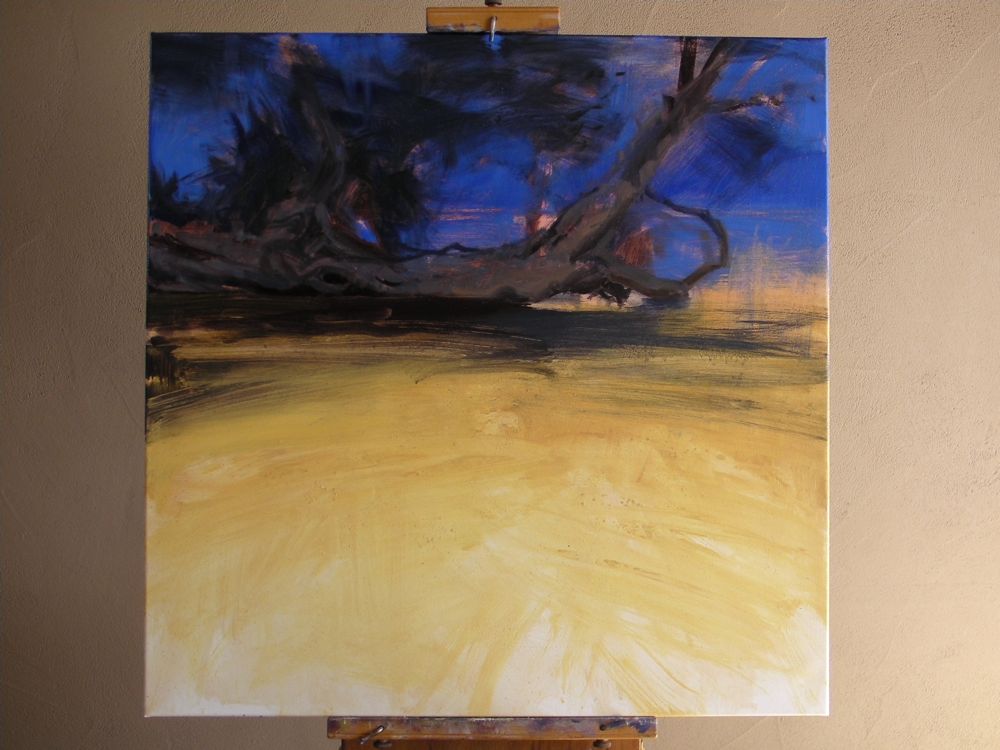 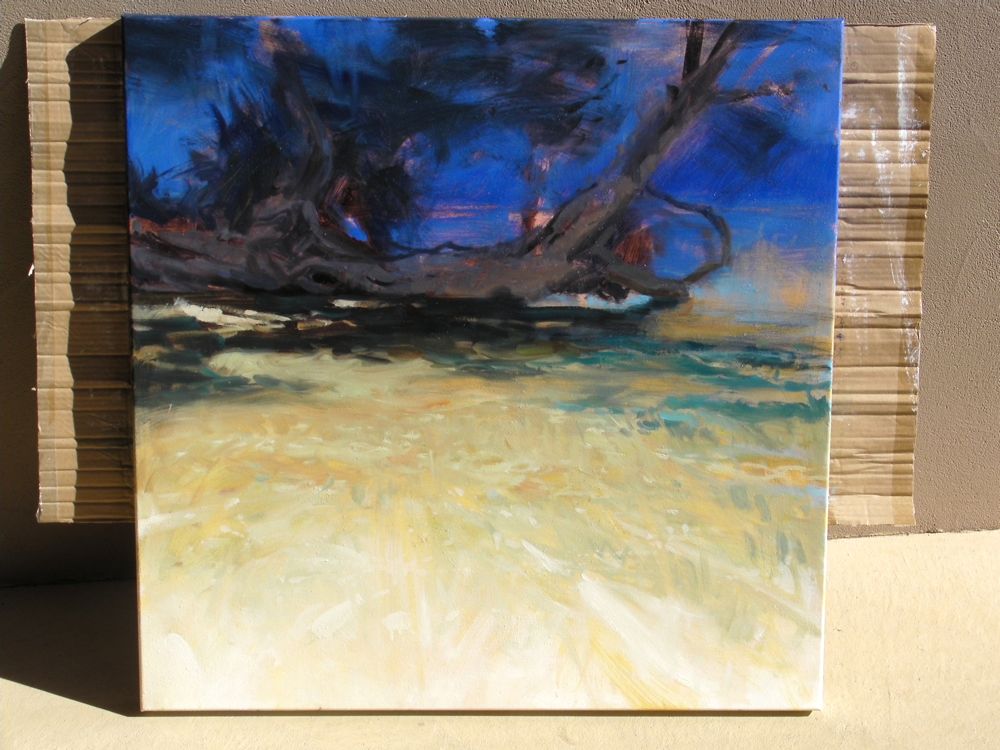 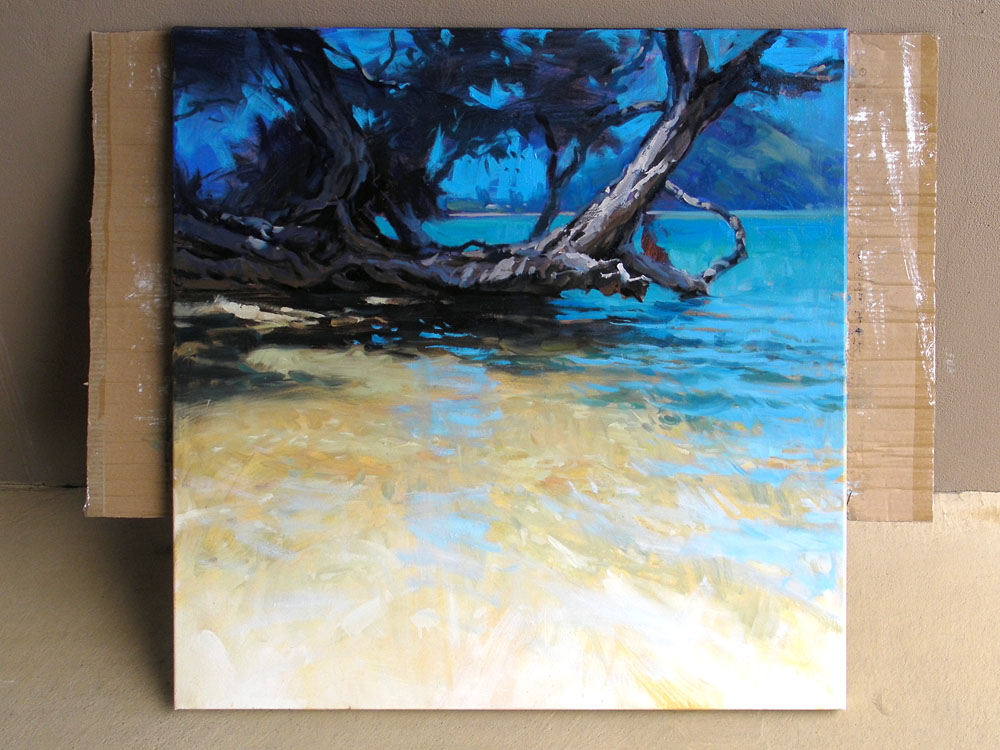 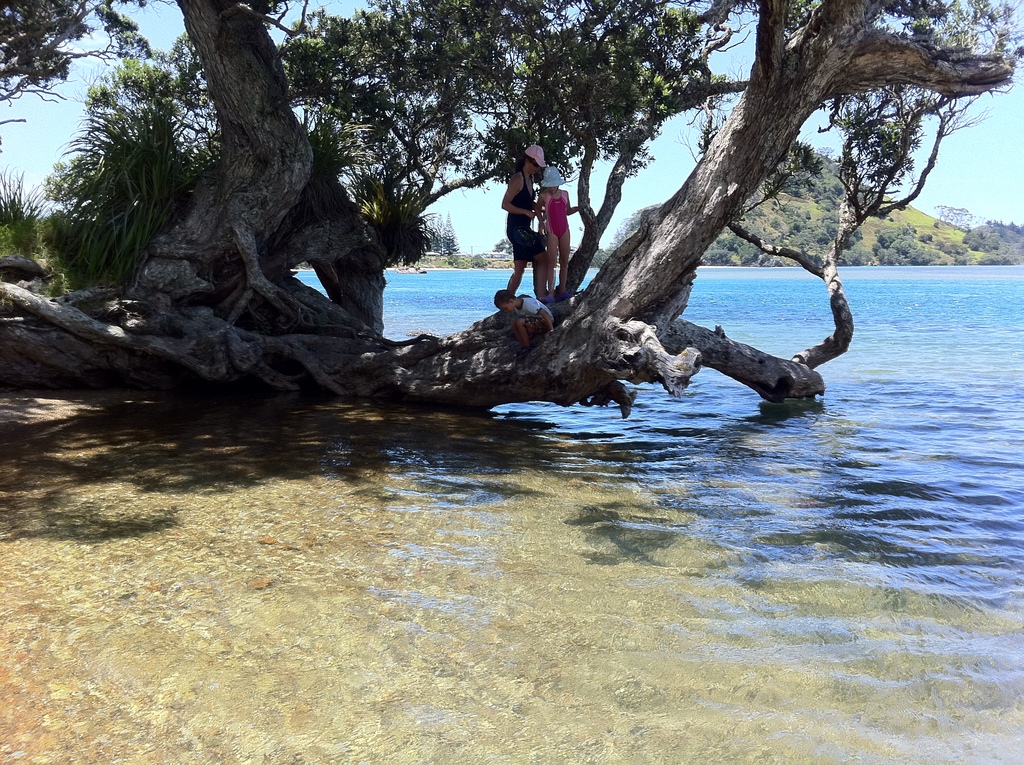 I love your painting.. The yellow is wonderful and the water is beautiful..  Personally I think there are too many bright red bits in the tree,  it distracts your attention away from Luke.

Hi Richard,,,You know this little man moved the subject of the painting it is very beautiful.

I've been watching you and enjoying every minute.  At one point I thought you'd lost it.  Congratulations on winning.

This screen shot is when I thought your water colors were perfect.............Just my 2 cents.  Dorian aka/dor 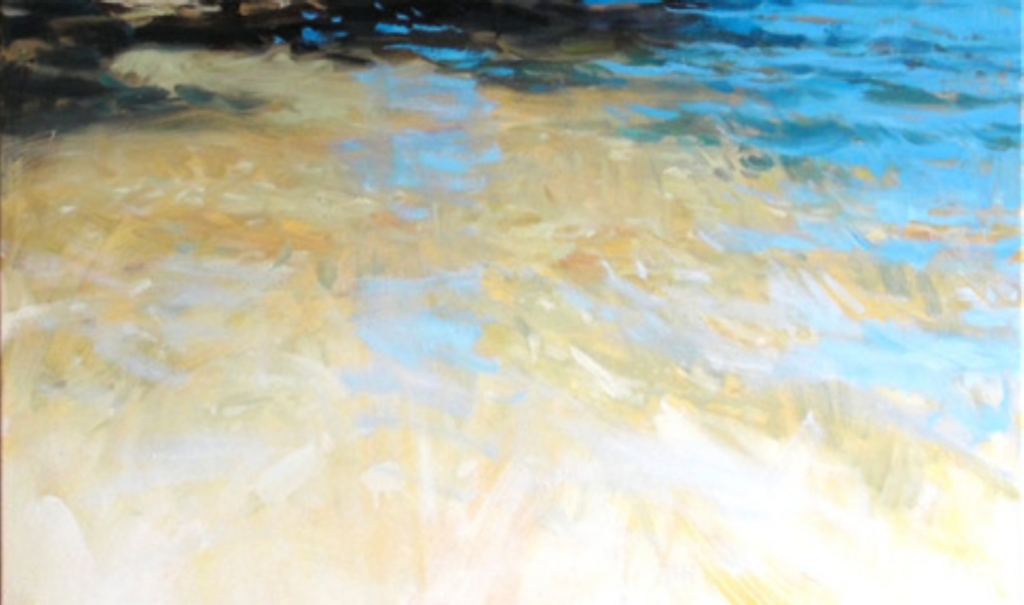 Comment by Dan Young on February 18, 2011 at 14:17
Keep the yellow...... you can see at my website www.danyoungartist.com I love the punch..... In a gallery I always immediately go to the warmer colorful paintings...... I guess I just like to jump up and down for attention..... Here in Hawaii the sunrise and sunset skies are the highlight of the day and it is the yellows and oranges that bring a smile....... With this color the sky is usually green so a red shade blue is not the best sky color......

Comment by Merv Appleton on February 18, 2011 at 12:42
Richard, this is really starting to take shape, I tend to agree with your thoughts on the Yellow, it is starting to be a little to over powering. It is great to see all the sketches of your son and how you went about the decision making of placing him in the right position, I have been down this road my self so know what you mean, it can be frustrating just getting it right. Thanks again for sharing, I agree with Melanie's comment, you are a wonderful painter and teacher.

Comment by Melanie Harbin on February 18, 2011 at 8:48
Richard,  First let me say this is going to be a fabulous painting!  Now, everything else I say can be discarded if you like for I am not a landscape artist so this is just a point of view.  I think the water color is good for now.  I would continue to paint and then make changes to it later if necessary.  However the foreground color is a little to demanding to me so as to be to distracting from the point of interest. If I were painting this,(ha,I wish) I would gray it down a bit as you already have a lot of intense color in the painting already and the fallen tree area is going to be so awesome.  I can't wait to see the finish.  You are a wonderful painter and teacher.